This is the second time we organise this kids corner at Blendwebmix, a huge event in Lyon with the startup and web ecosystem. The first year, we made an hour of code and a stop motion workshop. It was cool, but we thought we could make something better.

So this year, we have changed the formulas. There was still some coding (we were having kids create a web page) but we spend some time with the fellows organizing the game jam. Yes, kids were participating in a game jam project!

The theme was “monsters in Lyon”. There was 5 teams (composed of students from different schools) so we divided the kids in 5 teams. The students had a couple of hours to imagine a concept and pitch it to kids. Of course, were asking questions, and proposing improvements.

Then kids were having an important task : create assets for their team ! The game jammers had to include them in the game, one way or another. Some use them as is, some made them in 3D! 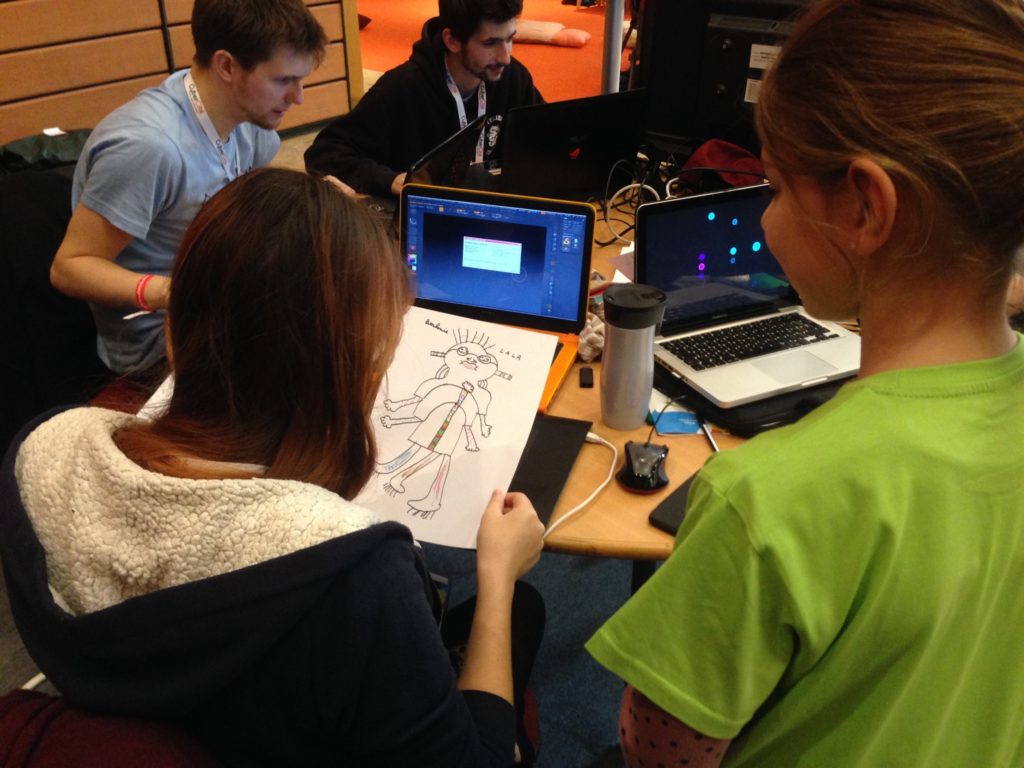 Er, so this is the main character?

We thought it would be enough for kids, but many of them started to discuss with the students, asking how they were doing this and that and even made them some mockups of the UI, or asking for special features in their games.
really funny for us to see, maybe not so much for the jammers.

In the end 3 teams could finish their game. You can find the games in the game jam page

Learn how to make games by designing them

We organized this workshop several times this year, with kids and families. The idea is simple : you choose between several options :

But first we roll the publisher dices : a choice made for you by an imaginary publisher.
And this is where many options become limited and where we explain why. 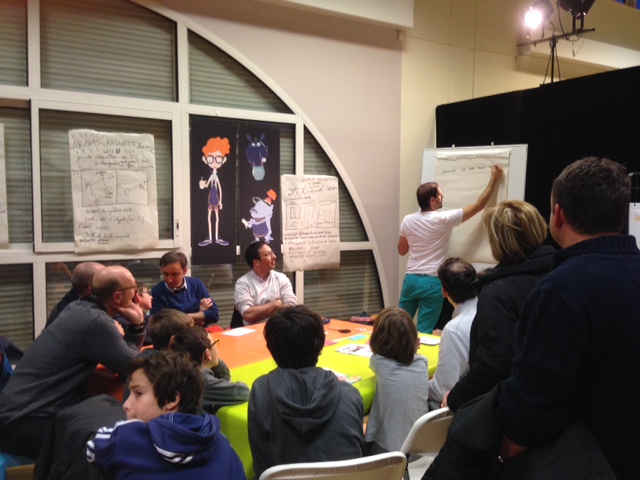 So this is why skaters must kill zombies…

We had many questions from parents about business models or data gathering. Well, parents are concerned of course. We also explain how it could affect game design, for example why a free game with add is designed so that you keep playing a lot in short sessions that can be interrupted by an ad, or how design or art choices allow to make a cheaper game.

The most satisfying moments were maybe those with people who are not gamers and enjoy designing a game with us, such as these 2 moms who imagined this game with a grocery that sells organic food that would be connected to a real life store.

A good experience for our studio

As you may have noticed, we are not using any screen in our workshop, nor at the game jam. This is mainly about brainstorming, drawing stuff on paper, and talking. The fun thing is that our workshop was always occurring in events where we were surrounded with game consoles, minecraft battles or Occulus demos.
But we were, most of the time, full!

So, yes, we make games for kids that are played on devices with screen, and yes, we think that on many occasions, you can learn better with no screen. It depends on what you want to achieve.
In this scenario we have a group of people collaborating in a creative process, with discussions and questions that pop out, that we try to get an answer to.
So, mission accomplished!

We have had sessions with really different people and our job there was to help the magic to happen. It was not always easy but we got really cool results from groups with adults and kids, and sometimes unexpected ideas that are fitting together and boom, a fun concept, at least at the pitch stage.

So it’s probably a very good idea to organise this kind of brainstorming session with people from different culture, social level, interest… that are gathered together with you and trying to create something. We are probably going to see if we can use that in our participative design sessions, by mixing age groups or bring parents (without them noticing that they are participating because they can be shy 🙂 ) in the discussion…

Kids are not what you think

During the workshop and Blend kids, we have met a lot of kids. Really a lot!
Most of the time they have a really good culture of video games, and can be really mature about content or business models.
It’s always fun to discuss with an 8 years old kid who plays GTA V. Actually, parents are those who need to learn more about games, even those who used to be gamers when they were kids.

We have also noticed that some kids have a really good idea of what they want and how the game, or the UI should be. This is sometimes a little bit too conventional, but still, they have a lot of knowledge.
As a developper we must not forget to stay in contact with these kids, and probably having them more and more involved during development, and even after the game is released, when working on updates!